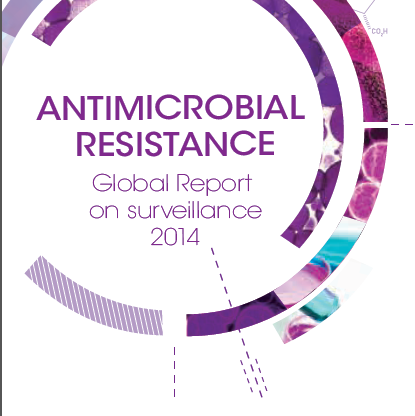 The World Health Organisation recently released a report entitled, “Antimicrobial resistance: global report on surveillance 2014″ and you can download the complete report HERE.

This is not the kind of morning coffee drinking news you want to read.  It is the largest and most comprehensive study ever conducted on the emerging crisis of antibiotic resistant bacteria, such as the commonly discussed MRSA (meersa) Methicillin-resistant Staphylococcus aureus.  The study which collected data from 114 countries covered the seven most common bacteria that causes harmful infections from blood poisoning to gonorrhoea.

It found that currently there is a very high incidence of resistant bacteria across the majority of reporting countries.  The following table illustrate:

Those are very scary statistics.  Imagine, if this trend was to continue a world where a child could fall and scrap their knee, contract a resistant form of infection and die.  This from a form of bacteria that not 10 years ago was easily treated.  Worse still is the ramifications for modern medical surgery.  Forget something as simple as a hip or knee replacement, let along open heart surgery or even a routine catheter or angioplasty.  Each of these procedures would carry the very real possibility of death from infection.  Say goodbye to the miracle of modern science and hello to Civil War area medicine.

How could we let it get this bad?  Well, simple… money and stupidity.  Big Pharma likes selling antibiotics.  They sell them to you and me, industrial farming operations, animal feed producers, and any one else willing to pay.  Now a guy called Darwin popularised the concept of evolution.  Well, unlike humans or other animals, bacteria can produce multiple generations at an exponential rate.  Meaning, that for them evolution can occur must faster that in a macro organism, like a bird or fish.  Due to the over exposure to antibacterial compounds these bacteria, which like any other living organism have a deep rooted desire to live, have begun to evolve resistances.  At this point, you’re saying, ok… so we just need new antibiotics, right?  Well, you’d be right… if there were any.

Here’s the big news… no new antibiotics have been developed since 1980.  In 34 years, we’ve invented Viagra, the modern Internet, and “cures” for everything from “restless leg syndrome” to every form of anxiety imaginable, but we’ve only pumped out “new” versions of old antibiotics.  The below chart illustrates.

So… don’t take my word on it.  Read the WHO Report, browse the web, and see what you can do to help prevent the crumbling of the foundation of modern medicine.  Also, take a moment and help “your” political representatives know we need to stop throwing money at the “War on Drugs” and start truly funding the War for Drug (Antibiotics).