Home News Commentary It’s All in the Flow… 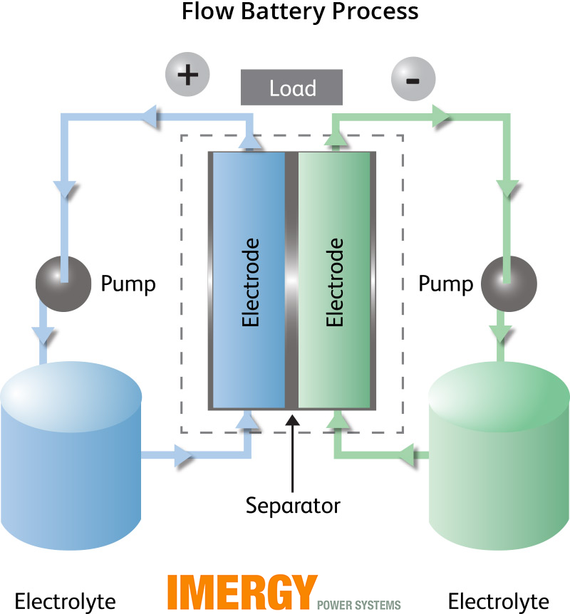 “Old School” geeks may be about to introduce a leap in energy storage that has the potential to revolutionise how neighbourhoods get their electricity.  Anyone who has built a solar or wind energy system knows that the some of the biggest cost and most limiting elements are the batteries.  Typically the DIYer will build a bank of deep cycle 12v marine batteries, or go budget and collect old 12v automobile batteries.  These systems have numerous points of failure and limited life as the acidic liquids contained in the batteries lose the ability to “hold a charge.”  On a small scale, most people find a way to make it work, but on a large scale… forget it.

Until now, it seems.  Scientists at Imergy Power Systems have been working on a Vanadium Flow Battery for the last few years and are reportedly close to a fully functional model.  The VFB works by pumping pumping positively and negatively charged solutions of vanadium from storage tanks through a separator tank.  These opposing solution passing by a specially designed plate cause a reaction that creates the electricity.  Well, at least, that the simple, ELI5 (Explain Like I’m 5) version of it.  The big breakthrough, because vanadium can be both positively and negatively charged it doesn’t suffer from the same chemical breakdown as other elements.  This means that this type of battery basically lasts, “forever.”  To increase the capacity, you simply increase the capacity of the storage tanks.

So imagine, your entire neighbourhood powered by a battery that fit in a 40′ shipping container that is charged from solar panels or windmills.  No more fossil fuels, no more power company.  Energy independence.

So how long until the big energy lobby finds a reason to outlaw this?  10…9….

For those that don’t know, directly below my comments is a little box that says, “Source” and next to that is the names of the publications with the full article.  If you click on the name you can view the original article all my hotair is about.